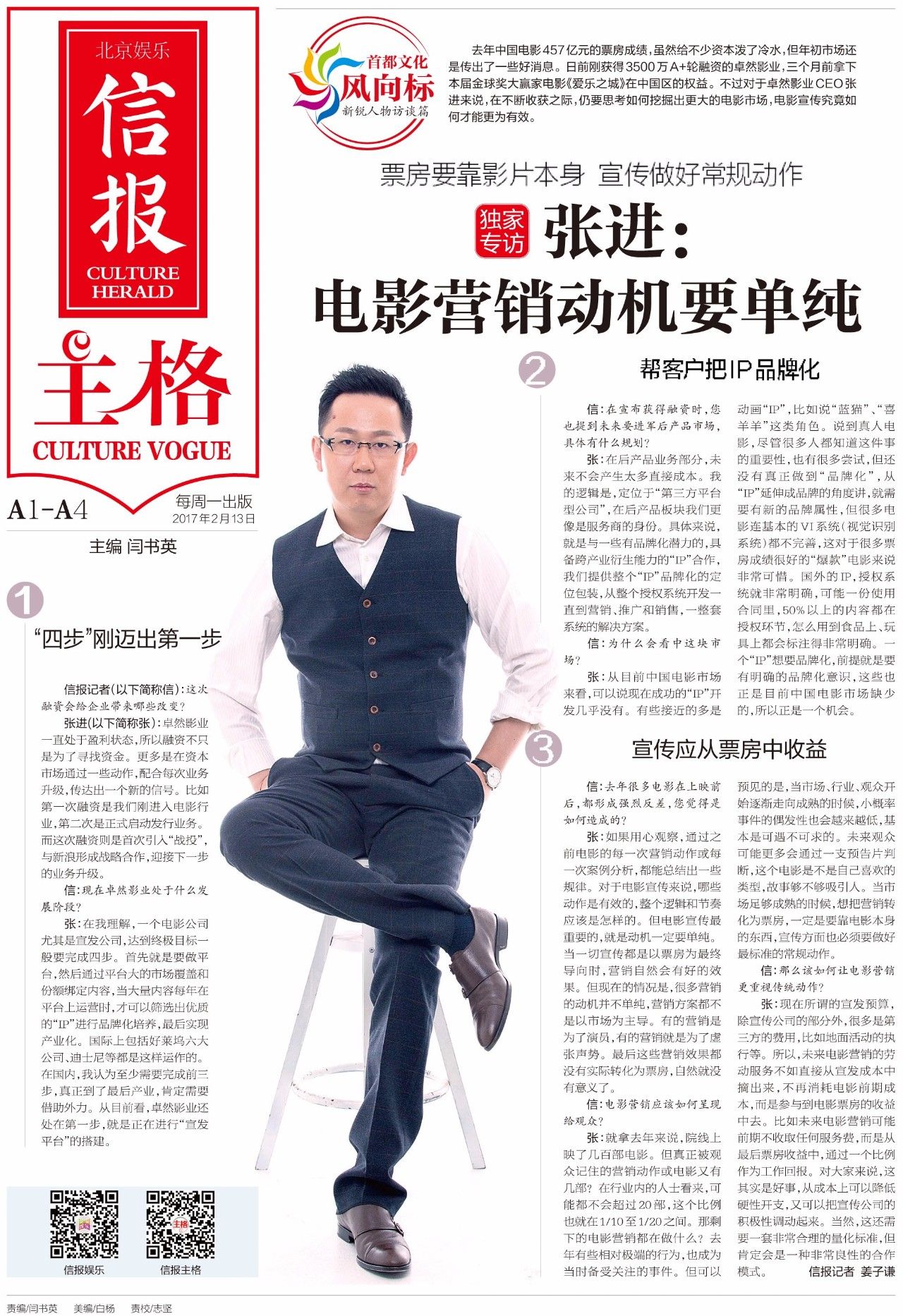 A few days ago, Joy Pictures CEO, Zhang Jin, who has just received 35 million A + round financing, gave an interview to the Beijing Daily Messenger reporter. After winning the rights and interests of the world's hottest film La La Land, which has been released in mainland China today, what he wants to think about is how to tap into a larger film market and how film publicity can be more effective.

Reporter: What changes will this financing bring to the company?

Zhang Jin: Joy Pictures has been profitable, so financing is not just about looking for money. More in the capital market through some actions, with each business upgrade, send a new signal. For example, the first financing is that we have just entered the film industry, the second is the official launch of the distribution business. And this financing is the first time to introduce "war investment", and form a strategic cooperation with Sina to meet the next step of business upgrading.

Reporter: What stage of development is Joy Pictures at now?

Zhang: As far as I understand it, it usually takes four steps for a film company to achieve its ultimate goal, especially for promotion and distribution company. First of all, we should do the platform, and then through the large market coverage and share binding content of the platform, when a large number of content operates on the platform every year, we can screen out the high-quality "IP" brand training, and finally achieve industrialization. In the world, including the six major Hollywood companies, Disney and so on, all operate in this way. In domestic, I think it is necessary to complete at least the first three steps, really to the final industry, certainly need to rely on external forces. From the current point of view, Joy Pictures is still in the first step, that is, the ongoing construction of "promotion and distribution platform".

Help customers in branding of IP

Reporter: In announcing the financing, you also mentioned the future entry into the post-product market, what are the specific plans?

Zhang: In the post-product business segment, there will not be much direct cost in the future. My logic is that we are more like service providers in the post-product sector, positioning ourselves as a "third-party platform company". Specifically, in cooperation with some "IP" with brand potential and cross-industry derivatives, we provide the entire "IP" brand positioning packaging, from the development of the entire licensing system to marketing, promotion and sales, a set of system solutions.

Zhang: Judging from the current Chinese film market, it can be said that there are few successful "IP" developments. Some are close to animations such as "IP", such as "Blue Cat" and "Pleasant Goat". When it comes to live-action movies, although many people know the importance of this matter and there are many attempts, they have not really achieved "branding". From the point of view of extending "IP" to a brand, they need to have new brand attributes, but many movies are not even perfect with the basic VI system (visual recognition system), which is a great pity for many "popular" films with good box office results. Foreign IP, authorization system is very clear, maybe in a use contract, more than 50% of the content is in the authorization link, how to use food, toys will be marked very clearly. A "IP" wants to brand, provided that there is a clear sense of branding, these are also the current lack of Chinese film market, so it is an opportunity.

Publicity should benefit from the box office

Reporter: Last year, many films formed a strong contrast before and after the release. How do you think it was caused?

Zhang: If you observe carefully, through every marketing action or case analysis of the previous film, you can sum up some laws. For film publicity, which actions are effective, and what the whole logic and rhythm should be. But the most important thing about film publicity is that the motivation must be simple. When all publicity is box office oriented, marketing will naturally have a good effect. But now the situation is that a lot of marketing motivation is not simple, marketing programs are not market-oriented. Some marketing is for actors, some marketing is for bluff. Finally, these marketing effects do not actually translate into box office, of course, it does not make sense.

Reporter: How should film marketing be presented to audience?

Zhang: Last year, for example, hundreds of movies were shown on the cinema. But how many marketing moves or movies are really remembered by the audience? In the view of people in the industry, there may not be more than 20 units, which is between 1: 10 and 1: 20. So what are the rest of the movie marketing doing? Some of the relatively extreme acts of last year also became a matter of great concern at the time. However, it can be predicted that when the market, industry and audience begin to mature gradually, the occasional occurrence of small probability events will be lower and lower, which can not be found. In the future, audiences may judge more by a trailer whether the film is their favorite type and whether the story is attractive enough. When the market is mature enough, if you want to turn marketing into a box office, you must rely on the film itself, and the publicity must also do a good job in the most standard routine action.

Reporter: So how to make film marketing pay more attention to traditional actions?

Zhang: Now the so-called budget, in addition to the part of the publicity company, many are third-party costs, such as the implementation of ground activities and so on. Therefore, the labor service of film marketing in the future is better than taking it directly from the cost of publicity and distribution, instead of consuming the cost of the film upfront, but participating in the revenue of the film box office. For example, future film marketing may not charge any service charge in the early stage, but from the final box office receipts, through a proportion of the work in return. For everyone, this is actually a good thing. In terms of cost, we can reduce hard expenses and mobilize the enthusiasm of publicity companies. Of course, this also requires a very reasonable set of quantitative standards, but it will certainly be a very benign model of cooperation.